In the show and shine at Camper Jam this year there was a T25 with an interesting sign in front of it: “This van drove around the world and slept five!” 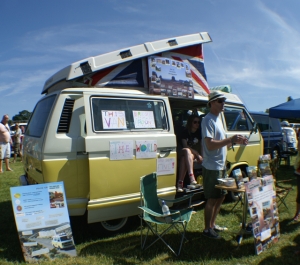 We stopped to listen to the man talking, and soon found out that he was Sim Courtie, author of The Long and Whining Road, and that he and his family had made a round the world journey in Penny, their T25 camper. The idea for their journey was born following a trip to Sim’s native Liverpool, when various members of the family developed wanderlust and a desire to explore the world-wide appeal of the Beatles. The family decided to busk their way around the world, singing Beatles songs and raising money for charity.

The adults took sabbaticals from work, and the children from school to embark upon an epic extra-curricular road trip, planning to begin outside Strawberry Field children’s home in Liverpool, and ending at Strawberry Fields memorial garden, New York. What follows is an engaging and enjoyable travelogue that conjures up the sights, sounds, smells and people they encountered on their travels, with a healthy dose of the troubles encountered by Penny, their 1989 camper van, familiar to anyone who’s owned an older camper. 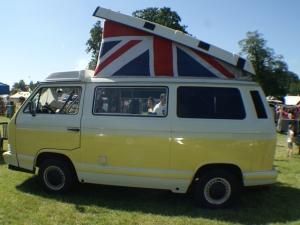 The book inspired a desire to travel the world in me, but also made me worry about the practicalities of taking Ruby, a 46 year old van, around the world. Sim encountered difficulties with having parts of their van replaced, including one memorable episode that involved a costly misdiagnosis, both in terms of time and money. Also, driving in some parts of the world seems to incur an increased risk of bodywork damage. Eeeek! We’re signed up on a Type 2 Detectives Bus Boot Camp in September, but would we be able to deal with mechanical mishaps that would undoubtedly occur? Also, what spares would we have to carry? (Perhaps it would be best to just tow a complete spare bus along behind!)

Problems aside, what the book created most of all was an endearing image of the camaraderie and support that virtual strangers will give each other all over the world. Invitations to wedding parties, offers of accommodation on driveways or in houses, support for their busking and lots of camper van love! I also particularly enjoyed Sim’s recount of a Turkish massage, as it was similar to our own on honeymoon in Northern Cyprus, and the camper community that sprung up in Agonda that reminded me a little of The Beach, only with a slightly less dramatic conclusion!

I loved the book, couldn’t put it down, and was genuinely sad when I’d finished it. Sim’s ability to engage an audience and tell a story makes the book enjoyable and addictive. It is available in paperback and for Kindle.

I have not been asked to review The Long and Whining Road. I just really enjoyed it!